We recently acquired The Loom from an angel who wanted the loom to find a special home, and our alpaca ranch was chosen to be that home! We are pleased to announce that the Millennium House will be added to our property in mid-November as the permanent home for the loom and other artifacts. It will be a start, and we hope to add pieces historic to the time as they are donated. With a very limited budget it will grow sloooooowly.

The Loom has a history dating back to right before the Civil War in 1859. It is a Georgia Barn Wood Loom, and it was one of a few that survived Sherman's Historic March to the Sea and torching of everything a long his path as the war came to a conclusion.

The Loom, legend has it, was saved by freed slaves who convinced the Union Army to spare it so they could start a business after the war. It was housed in the cellar of an old school house where it stayed until 1866. The freed slave became one of the first Negro Business owners in Macon, GA, where he died at 63.

The estate sold The Loom around 1876, the year of 100 year anniversary of America to a young newlywed couple from County Cork, Ireland who were heading West to California in their newly acquired Prairie Scooner. They disassembled The Loom and stored it in pieces on the floor of the wagon and covered it with a goose feather mattress. Their first born was conceived with the financial support from the loom.

On July 29, 1876, the couple arrived in a young Texas city called Dallas, founded in 1841 and built along the 3 forks of the Trinity River. The weather was brutally hot that day.

The temperatures by 8 am the next morning, July 30, were topping out at 101 degrees, and it was too hot to rig up the horses and continue on the journey, so the couple found a cool tree along the Trinity River, about 10 miles North of Dallas to endure the day's heat. That day turned out to be the hottest in the history of Dallas. 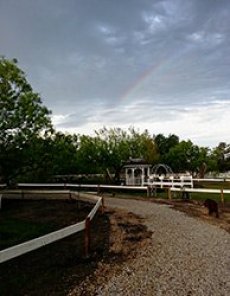 It was on that day, in the brutal 114 degree heat, that the young couple historic loom at Old Irish in Denton, Texas decided to end their journey, put down roots and homestead right there under the cool breeze of what they called the Crazy Tree, a giant willow that towered high and spanned the river as well as shaded a large enough area along the banks to canopy eventually a small cabin and lean-to. The Loom was assembled in the lean-to where it was used to weave Texas Cotton Blankets until 1902 when a fire destroyed the cabin and killed the couple. The Loom was spared again from the flames to be purchased by Italian Immigrants who worked for the railroad in Fort Worth. Their names were Andrew and Grace DeAngelo, and they had 4 daughters. Mr. DeAngelo was a conductor for the railroad, and wife Grace and the daughters managed a small retail shop where the loom was housed in the rear of the store to weave cotton cloth for light weight women's dresses.

The DeAngelos retired and passed right after WWI came to an end. The Loom was sold at auction and was stored in a garage until it was again sold at auction in 1998 to an older lady that intended to refurbish it, but that never happened. It was sold to another lady who operated a knitting shop in South Dallas who was kind enough to give it to us to display here at Patricks' Pastures. It is our hope that upon our passing that they will take the loom and make it part of their apparel and design program. We hope to erect a building soon to house the loom for display. Donations to the building and preservation fund are welcomed. 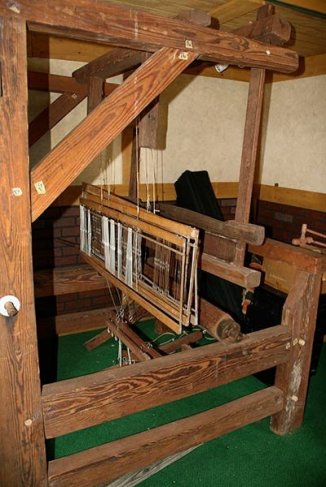